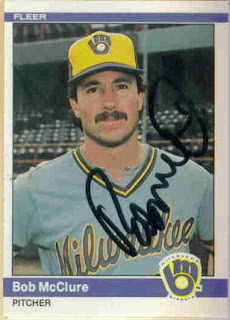 #206 Bob McClure
Well, I am now caught back up. Before I got my scans back from my Texas trip, I was on 1983 Topps. I just finished that set up and am moving on.
I got this card signed when I got my last McClure card signed- at the Royal's parking lot a few weeks ago before a game. If you look at that card, you'll notice that he changed his mustache style by the time this picture was taken. I, personally, preferred the older style.
Speaking of mustaches, did anyone catch the Bricktown Showdown on ESPN2 tonight? The Sacramento River Cats were rockin' playoff mustaches, ala the hockey playoff beard. I wonder if this is going to turn into some kind of baseball tradition. When I was in Texas, I went to a Grand Prairie Airhog (American Association) playoff game against the Sioux Falls Canaries. The Canaries were rockin' the playoff 'staches and they won the league title. Sacramento won their league title and the AAA title. Coincidence? Not likely.
at 1:59 AM