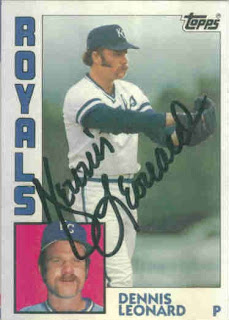 #375 Dennis Loenard
I got this card signed at this past winter's Royals Caravan. The Caravan has been coming to my town since I was in middle school (at least that's the first one that I remember). They used to always go to the mall, but sometimes they go to odd places. One year, they came to my middle school. Once, when I was attending Kansas State, they were at the women's basketball game (which I thought was dumb because you had to buy a ticket to the game to get autographs) and a few years ago, they were at a Buick dealership.
Well, this past year, they went to Wal-Mart and Sluggerrr, the Royal's mascot, came with them. He was walking through the line screwing with people when he got to my friend's eleven year-old brother, Aaron. Aaron wanted nothing to do with Sluggerrr, so Sluggerrr chased him around the line for a bit. Finally, he moved on and when he walked by, I grabbed his tail. He turned around real quick to get whoever had done it and I pointed at Aaron. So, he starts chasing Aaron around again and then heads over to the clothing department and grabs a belt and proceeds to chase him with the belt while occasionally snapping it. We all thought that it was pretty funny and it sure made standing in line less boring.
at 8:02 PM