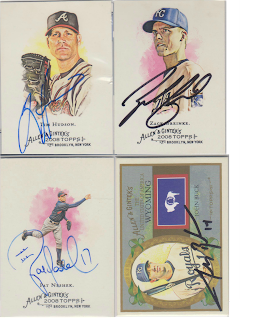 I have over 250 cards signed from 2008 sets. Since I am doing good to average a post every other day, it is going to take me a year and half to get all of those cards posted. So, to help speed up the process, I am going to cut some corners for the first time ever on here. The new rule is that each player gets one post. If that player comes up again, he gets lumped into a set round-up post like this one. The one exception would be that if I only have one card from a set signed, it is getting its own post regardless. It only saved me three posts on this one. But, when I get to Topps, it will save me more than thirty posts.

Zack Greinke- Royals Fanfest 2009, my first Greinke card on here since 2012. Can you believe I actually gave away a signed Greinke Sports Illustrated on here once?

The links take you back to an original post of that player.
at 3:48 AM

I'm a fan of this new format.