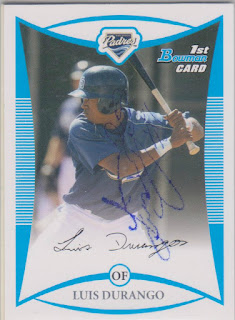 Here is a Padrograph that was given to me early on in my blogging days. Rod and I started our blogs around the same time and he once sent me stack of over 100 signed Padre cards. This is one of those.

Luis is kind of a rarity in this set based on the fact that he actually made it to the Major Leagues. Okay, maybe it is not that rare- nearly half the prospects that I will be posting on here made it to the Show.

This past season, Luis was playing in the American Association and I happened to catch him at a Wingnuts game where I got three more cards signed by him. He has a cool looking sig that has changed a bit since this one was signed.
at 8:12 AM