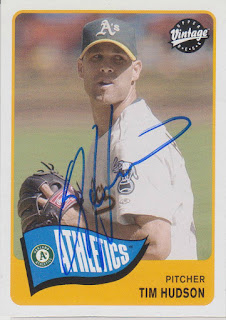 Here is a card of Tim Hudson that I got signed at the Kansas Stars game in 2016. That was the first year the Stars played in the NBC World Series and it was quite an event. I had to buy tickets in advance of the game because they were selling out. That never happens for that tournament. The game was actually sold out before I got tickets, but they ended up releasing some standing room only tickets and I was able to get some of those. It probably didn't help that I was going to the first game that the Stars played in and there was lots of hoopla for it.

Unfortunately, after playing in the tournament for two years, the Stars did not come back this year. They claim they didn't come back because the casino that hosted them, the Kansas Star, was hosting a convention and didn't have rooms for the team. Personally, I think that is a load of crap. I think that the NBC didn't want them out there whooping up on college kids. But, that is just my opinion. Needless to say, but I did not go to the NBC World Series this year.

Tim Hudson is still playing for the Stars, but he has not started either of their two games yet.