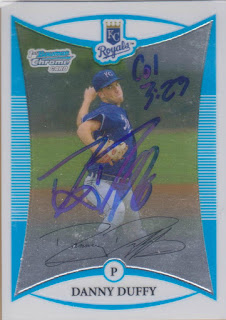 When I had my last job, I usually had to work on Saturday and had Sunday off. So, for about eight years, most of the Royals games I attended were Sunday day games. It was not ideal for me since Sunday batting practice is rare and BP is the best time for 'graphing. But, you could usually count on pitchers hitting the field to get their work in, so I would mostly take cards of pitchers.

On this particular day in 2011, it was overcast with off and on rain. The White Sox were in town and the action on the Sox side of the field was not very good. I ended up on the Royals side and did much better over there. While I only got three Royals to sign for me, it was three times better than I did with the Sox. My dad spotted Danny signing, so I went over there and he signed three for me. I got lucky because it was still misting out and all three sigs came out without any issues.

Danny has been very hit and miss during his tenure with the Royals. The once prospect has dealt with some personal issues and injuries throughout his career. He is supposed to be Kansas City's top starter, but he has yet to log more than 28 starts or 180 innings. He has one double digit win season and that was the year he got demoted to the bullpen and made nearly as many relief outings as starts.

Nonetheless, I like Duffy and keep rooting for him. Every year, I am hoping it is the year that he figures it out and dominates. Hopefully 2019 is that year because the Royals are going to need him.
at 4:11 AM