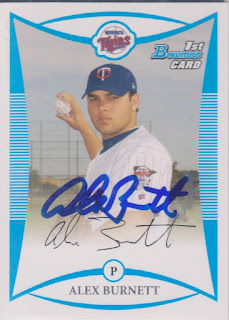 Here is a card that I got signed at a Wingnuts game in 2014 while Alex was playing for Sioux City. It was about 95 degrees that day and he came out of the clubhouse in a hoody and with his hood up. I asked him what was up with the hoody and he was curious if it was too hot for that or not.

Alex played parts of four seasons in the Majors with the Twins, Orioles, and Cubs. Over that time, he appeared in 177 games in relief and racked up a record of 8-11 with a 4.69 ERA. His best season was probably the 2012 campaign with the Twins. That year, he appeared in a career-high 67 games and 71.2 innings. While his WHIP was well over 1.00 and his K/9 was around 4.5, he held opponents to a 3.52 ERA, which was nearly two runs less than his previous career-best. But, that was the beginning of the end for Alex. The next year was spent with four different franchises and he would only log 2.2 innings of work in the Majors, which was evenly split between the Orioles and Cubs. Then it was on to the American Association in 2014.

In 2015, Alex pitched 8.2 inning in Mexico before calling it a career. Nonetheless, encounters with players like Alex were definitely the highlights of 'graphing Wingnut games. While I am going to miss that franchise, especially this coming year when there will be no minor league ball in Wichita, I am sure I will forget about the American Association pretty quickly once AAA ball comes to town.
at 1:35 AM