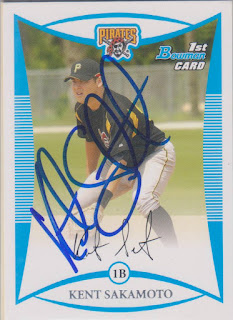 In 2009, I flew out east to visit an Army buddy that was living in Maryland at the time. The visit just happened to coincide with the Carolina League playoffs that were taking place up the road in Wilmington, Delaware. Being a Royals fan, I was determined to make my buddy take me up there to watch the Blue Rocks in action.

We almost didn't go to the game as it was raining a ton when I got out there. My buddy was convinced they were not going to play, but he really didn't want to go anyway. After considering not going, I figured it was worth a shot and we made the drive.

It was not the best 'graphing conditions with the wet weather, but we managed to snag a few dry autographs. I focused on the Wilmington side and made my buddy do the Lynchburg side. He did surprisingly well for not being a baseball fan. In fact, he did a little too good and was out 'graphing in the rain and ended up with a few autos that smeared from rain drops. But, this is one of the the ones he got and this one came out looking great.

Kent played in the Pirates organization for just four seasons and never advanced above high-A Lynchburg. In 2009, he was repeating high-A and having a dreadful season. In 72 games, he hit just .189 with 7 home runs and 29 RBI. That was the end of the road for him in affiliated ball and he then jumped to the American Association for two seasons before calling it a career.

Delaware is now added to the 2008 Bowman map. 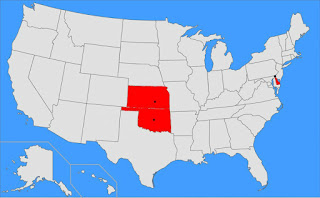