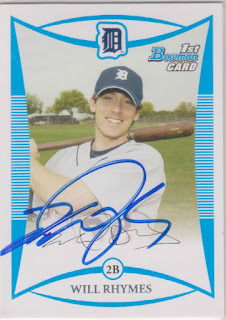 Here is a card that I got signed outside of Kauffman Stadium in 2011. Prior to 2011, The K was a great spot for 'graphing as players arrived at the ballpark. Then, there was an incident involving Melky Cabrera and an idiot fan and the Royals made a lot of changes that made it not so great for getting autographs. The biggest change was that Royals players got shuttled into the park from their parking lot in a golf cart. I use to get a ton of 'graphs from Royals players as they arrived, but that is a thing of the past. Maybe five percent of the arriving Royals will stop to sign on the way in now.

Another thing the team did after the Melky incident was declare certain areas outside the park as "NO AUTOGRAPH ZONES". They had signs made up with that saying and everything. The signs only lasted a couple of seasons and they now have barricades set up where visiting players can walk into the park. At least with the barricade, you can still ask the player to sign at the barricade.

On the day that I got this card signed, I was breaking the rules. Will arrived in a cab and got dropped off at the "no autograph zone" (nowadays, they all show up in Ubers). I went over and asked him to sign anyways. I just had this one card of him and I was in and out. Now, if it was a big name player and he got mobbed, security would have come out. But, I had him one-on-one and it was quick, so there was no issue.

Will played parts of three seasons in the Majors with the Tigers and Rays. He appeared in 130 games and he hit .266 with 2 home runs and 29 RBI. His best season was his rookie campaign in 2010. That year, he got into 54 games and he hit .304 with a home run and 19 RBI. That first home run was off of Zack Greinke.