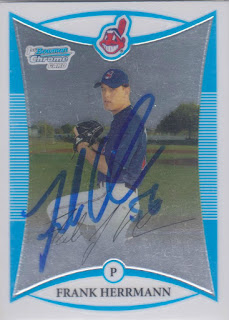 Here is a card that I got signed at a Royals game in 2010. Frank spent the second half of that season on the Indians roster and I was able to get him to sign the lone card I had of him at a late September game I attended.

After that season, Frank signed with Japan's Rakuten Golden Eagles and has done well in his two seasons there. This past season, he was 2-3 with 18 saves, a 1.99 ERA, and nearly a strikeout an inning. Those 18 saves lead the team and ranked fifth in the Pacific League.