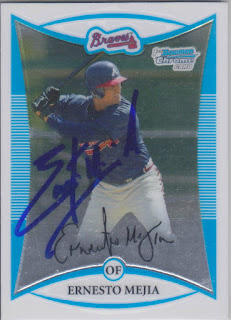 Here is a card that I got signed in Springdale, Arkansas in 2010. Ernesto was playing for the home team Northwest Arkansas Naturals at the time and he signed for me on the way in from warming up.

When I was looking up Ernesto's stats, I was surprised to see that he is still playing ball. At this point, I figured that he would be in an independent league by now or even Mexico. I was wrong on both of those guesses. Ernesto has spent the past five seasons with the Seibu Lions in Japan's Pacific League.

He had an off year last year, but he might have been hurt since he only played in 82 games. Two years prior, though, he had a monster season. That year, he hit .252 with 35 homers and 103 driven in. Those 35 dingers were the second most in the league and his RBI total ranked third. That is pretty impressive. And to think that I just assumed that he was a career minor leaguer that never panned out.

Ernesto is only 33 years old. I wonder if he will ever get a chance to come back to the States to play.

Arkansas is now added to the '08 Bowman map. 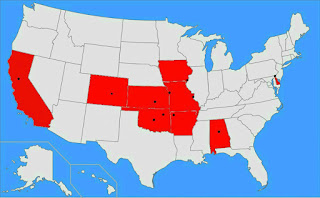