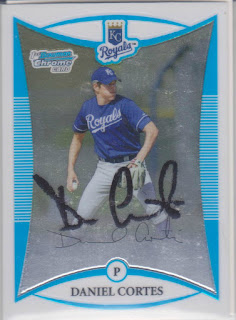 Here is a card that I got signed at Royals Fanfest in 2009. If I remember correctly, that was the first year of Fanfest. Back then, they would bring in the minor league award winners to sign and that is how I got this card signed.

2008 was when I got back into collecting autographs and the chrome cards were kind of new to me. I didn't have any experience getting them signed before this card and I had no idea of the concept of prepping cards. So, I took two of these chrome cards with me, the only two cards of Cortes that I had, and got them both signed. This one turned out okay. The other one looks horrible. But, I now know about prepping cards and I do not have an issue with chrome cards anymore. But, if given the choice, I would prefer a non-chrome card.

Dan never made it to the big leagues with the Royals, but he did see a bit of action with the Mariners. He got dealt to them for Yuniesky Betancourt during the 2009 season and made his Major League debut the following year. In his two stints with the Mariners in 2010-11, he pitched in 14 games in relief and was 0-3 with a 5.06 ERA. Sadly, the Royals won that trade.

Dan is no longer playing ball, having thrown his last inning in 2014 in the Atlantic League.
at 7:27 AM

I got him signed in at minor league game. At the same game he almost got killed by line drive foul ball shot. He was sitting in the dugout when went it went foul and into the dugout right where he was sitting. If he didn't duck and move within a second he would have been dead.

Dang! Where was that at?