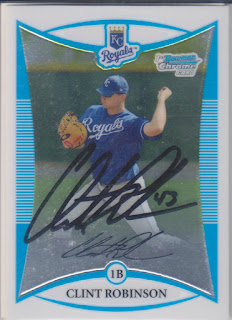 Here is a card that I got signed in Wilmington, Delaware at a Carolina League playoff game in 2009. You can read more about that trip to Delaware in my Kent Sakamoto post that I did earlier this month.

Clint played in the Royals system for six seasons and did well at every level. At the Blue Rocks game I attended, he got the player of the year trophy. The next season in AA, he hit 41 doubles, 29 home runs, and had 98 RBI. In AAA in 2011, he hit the 100 RBI plateau while posting a .326 batting average.

The only reasons why Clint never got a shot in Kansas City were because of Eric Hosmer and Billy Butler. Eric was the golden boy first round pick at first base while Billy was the seasoned vet that could only hit who had designated hitter role locked down. So, the Royals traded Clint to the Pirates after the 2011 season for a pair of players that would never wear Royal Blue.

Here is a below average photo of Clint about to receive his player of the year award in 2009. 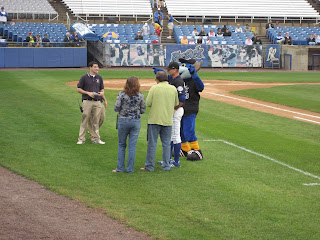