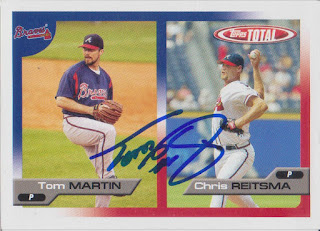 Here is the third and final card of Tom Martin that I got signed at the Kansas Stars game last year. I posted the first card, an Orioles minor league card, nearly a year ago and an '04 Topps Total card two months ago.

This is also the last card from the 2005 Topps Total set that I have to post for now. When I posted the first one nearly three weeks ago, I speculated that it would take me until Thanksgiving to get the nine cards posted. Having got them all by Halloween has been a nice accomplishment for me. I still wish I had the time to post one a day like I did ten years ago, but life doesn't always allow you to do the things you want to do.

I thought that it was very odd where Tom signed this card. I have seven dual player cards from this set that I have got signed and every single one of them, except for this one, is signed on one side or the other. I am not sure what Chris Reitsma is up to these days. But, if I ever run across him to finish this card off, Tom's signature in the middle of the card will definitely throw the card out of balance.