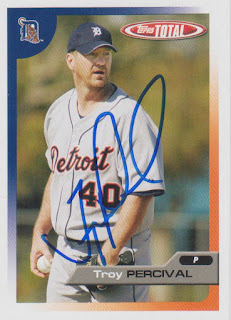 Here is the second card of Troy Percival that I got signed at a Kansas State baseball game last year. I posted the first one back in April. You can see that card and read about the miserable conditions Troy and I endured here.

I, and I am assuming most people, associate Troy as an Angel. After all, he spent eleven seasons with that organization. During that time, he racked up a club record 316 saves while making four All Star teams and helping the club to its lone World Championship. But, that all ended after the 2004 season when the Angels let him leave via free agency.

He signed on with the Tigers for 2005 and it was not a good one for Troy. He recorded only 8 saves while posting a then career worst ERA of 5.76. The Tigers shut him down in mid-July and he missed the rest of the season. He then missed all of the 2006 season, as well.

Troy finished his time in Detroit with a 1-3 record and 20 strikeouts.

Troy is currently the head coach of the UC Riverside baseball team.
at 10:52 AM