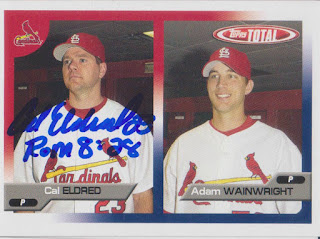 Here is a card that I got signed this past summer in Kansas City. Cal is the pitching coach for the Royals and I was able to get him to sign some cards for me from the bullpen at one of the games that I went to. When he saw this card, he made sure to tell me that he wasn't the one I needed to sign this card. That is no joke and I doubt that I will ever be able to add Adam to it.

While Cal signed three cards for me that evening, and this is the first of those three to get posted on here, this is not the first card of him to ever appear on this blog. I sent Cal a TTM request in the mid-'90s and I posted that card nine years ago. That card, a '93 Fleer, was glossy and unprepped and the signature bubbled up pretty good. But, you can still make it out and it is cool to see that Cal's signature has not changed a bit in nearly twenty-five years. He has, of course, added a Bible verse and his number to his autograph.

Speaking of his number, he wore 21 during that majority of his career. But, in his three seasons with the Cards, he wore 23. Considering that there are hardly any cards of him from his time in St. Louis, it is cool that he signs his correct number when given the chance.

When I got Cal to sign this card, it was during Player's Weekend. The name on the back of his jersey was "Corn Fed". I asked him about that and he said it was because he was always a bigger guy and that it didn't help that he was from Iowa.
at 10:25 AM

I just found this card of Cal Eldred in a Cardinal uniform. I have not seen one and am looking for one. Would you sell this one or can you direct me to where one might be. Thanks for any help