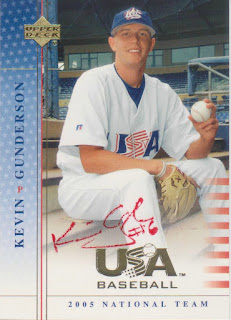 Here is a card that was given to me by Rod, from Padrographs, when we met up at a Hillsboro Hops game in 2015.

Most of the cards that I get from Rod feature a Padre or someone that had played for the Padres at some point. But, not this card; Kevin only played in the Braves organization. After a quick check at Baseball Reference, I see that Kevin is from Oregon. Oregonians are another lot that Rod collects. Even though I collect autographed cards of anyone and everybody, it is still cool when another person hooks me up with a signed card from their collecting niche. And that has happened quite a few times with Rod.

Kevin played at Oregon State and was drafted by the Braves in the fifth round of the 2006 draft. He played in their organization for four seasons, reaching as high as AAA in 2009. But, he only pitched in four games at that level and called it a career after the season. For his career, he was 12-10 with a 3.01 ERA.