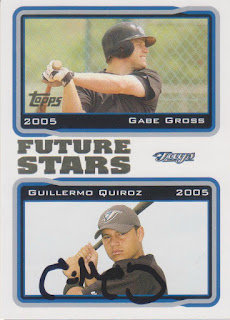 Here is the second card that I got signed by Guillermo Quiroz at a Sacramento Rivercats game in 2015. I posted the first card three months ago and that one can be seen here.

On the first card of him, it is a close-up photo of him in a blue jersey. Because of that, I decided to have him sign in black. It worked out great for that card, but not so much with this one. With the limited space and dark gray jersey, a blue Sharpie would have came out looking better.

Guillermo played in the Majors for parts of ten seasons with six different clubs- the Blue Jays, Mariners, Rangers, Orioles, Red Sox, and Giants. Yet, despite playing for so many teams, Guillermo did not get into very many ballgames. For his career, he played in 148 games. Over that time, he hit .199 with 3 home runs and 34 RBI. His biggest season was in 2008 with the Orioles. That year, he played in a career-high 56 games and he hit .187 with 2 home runs and 14 RBI.

One of these days, I would like to get this card finished. Right now, Gabe Gross is coaching at Auburn. I was hoping I would have been able to get it done at the College World Series this past summer, but Auburn got knocked out in the Super Regional. Maybe next year will be different.
at 1:38 PM