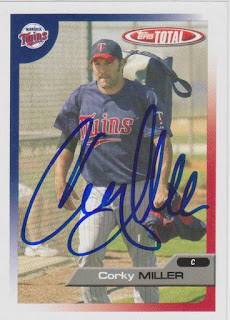 Here is the lone card that I got signed by Corky Miller at Spring Training in 2017. Corky is the Reds roving catching instructor and I was able to get him to sign this lone card at Reds minor league camp.

This is the only card of Corky that I own, so I assumed he had a relatively short career. That is not the case as he played in Major League games in eleven different seasons. He never played in more than 39 in any given season, so he was more of a third string catcher than anything.

I was looking forward to seeing what Corky's real name was. It turns out that it is actually Corky. His full name is Corky Abraham Philip Miller. There have been two other players that played in the Majors that went by Corky, but it was just a nickname for the other two.
at 10:26 AM