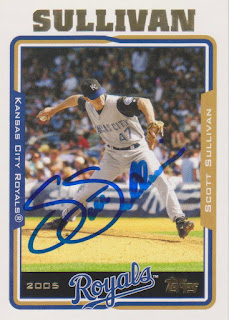 Here is a card that I got signed through the mail earlier this year. I got on a kick for a bit of sending cards out to former Royals who I did not have any cards signed by and that is why I wrote to Scott. It took about three months to get this card back.

Scott pitched in Kansas City for just one season, his final season in the Majors. That year, he was 3-4 with a 4.77 ERA in 60.1 innings of work. Prior to joining the Royals, Scott pitched nine and half years for the Reds and had a half season with the White Sox. He was 40-28 with 9 saves and a 3.98 ERA for his career.

Here is a fun fact- forty different ballplayers have appeared in the Majors with the last name of Sullivan. I never would have guessed that. But apparently, Sullivan was a very common surname back in the day. For instance, only two Sullivans have played in the Majors this century. On the opposite end of the spectrum, eighteen different Sullivans pitched in the 1800s, including three that were born in Ireland.

Scott has got a beautiful looking signature.
at 9:43 AM