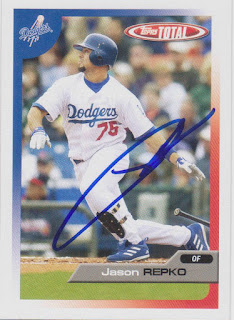 Here is a card that I got signed at a Wingnuts game in 2015. Jason was playing for the Sioux Falls Canaries at the time and was nice enough to stop and sign this lone card I have of him. What exactly he signed is unknown to me as this might be the worst looking autograph that I have ever posted on here. I have absolutely no clue what is going on with that signature.

Jason spent parts of seven seasons in the Major Leagues with the Dodgers, Twins, and Red Sox. Over that time he hit .224 with 16 home runs and 67 RBI. His best season was probably his rookie year with the Dodgers. Though he hit only .221, he played in a career-high 129 games and responded with 8 homers and 30 RBI.

Despite playing in 360 games for his career, this is the only card of Jason that Topps ever made. Besides this card, he has just a 2000 Bowman card and an Upper Deck card from each year from 2005-07. All of his cards picture him with the Dodgers.

Jason actually has two games of postseason experience, both in the Division Series. One was with the Dodgers in 2006 and the other was with the Twins in 2010. In both instances, he entered the games late as a pinch runner and failed to score.