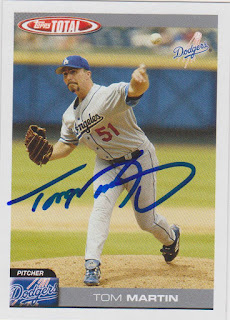 Here is the second of three cards that Tom Martin signed for me a the Kansas Stars game I attended in 2016. I posted the first one ten months ago and it can be seen here.

This card exemplifies why I loved Topps Total. Tom Martin pitched in the Major Leagues for parts of eleven seasons. Yet, if it was not for Topps Total, he would have one lonely Major League card from the 1998 Topps set. But, Topps included him in two of their three Total sets to get him up to a measly three cards. That is three times better than one, though. Kevin McCarthy has been pitching out of the Royals bullpen for three seasons now and he has yet to receive a card because Topps does not like middle relievers. The inclusion of those unheralded bullpen arms is why I liked Total.

By the time Tom joined the Dodgers in 2003, he was playing for his fifth different Major League team after having previous gigs with the Astros, Indians, Mets, and Devil Rays. With the Dodgers, Tom became a full time LOOGY and pitched in a career-high 80 games while logging just 51 innings to the tune of a 3.53 ERA. It was more of the same the next season until the Dodger traded him to the Braves for a minor league player at the trade deadline.