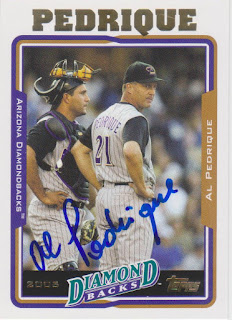 Here is a card that I got signed at a Spring Training game earlier this year. Al was the first base coach for the A's and they were the away team at the Angels Tempe Diablo Stadium. Prior to entering the park, my plan was to 'graph the Angels side and send my oldest boy over to grab some A's for me. Once I got inside, though, my plans changed. The Angles side was lined with people from dugout to foul pole while there wasn't a soul on the visiting side. So, I took the A's side and my kid took the day off and it worked out great. I think I got nearly twenty cards signed that day, along with a Marcus Semien batting glove.

Al managed in the Major Leagues for half a season. The Diamondbacks finished with a winning record in 2003, but they were a disaster come 2004. They started off the year 29-50 before Bob Brenly, the manager of their lone World Championship team, got the ax. Al took over and did just a bit worse than Bob did. He finished the year with a 22-61 record. The D-backs finished the year 51-111. So far, that is the only season that the D-Backs have lost 100 or more games.

Al was replaced with Bob Melvin the following year and has never been given another chance to manage a Major League team. But, he seemed to do alright in his first season as the A's first base coach as they grabbed a Wild Card spot this year.
at 11:20 PM