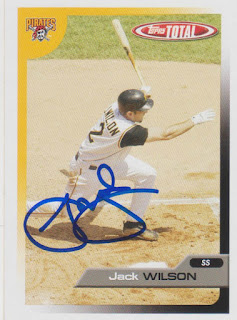 Here is the fourth card of Jack Wilson that I got signed at the Kansas Stars game last summer. While it isn't the last card of Jack that will be posted on here (I hope), it will be some time before I post another one since the next one in line is from 2011.

In the last post about Jack, I talked about the new chapter of AAA baseball coming to Wichita. Since that time, the city has officially closed the books on the Wingnuts and they are no more. But, thanks to an auction and a farewell ceremony at Lawrence Dumont Stadium, I have acquired some neat memorabilia from the team and ballpark.

Two weeks ago, the Wingnuts held an auction and were getting rid of everything in the park that was not bolted down. Items varied from all the team store merchandise to grills and coolers to ladders to equipment to paper towel dispensers to office supplies to furniture used to furnish player apartments. There was quite an array of things to be bought. Here is a picture of the cool stuff that I came home with- a couple of section signs and a game-used batting helmet. 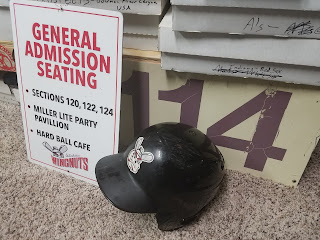 Then, three days ago, the city held a farewell ceremony for the park where fans could buy some of the seats. I had to work, but my wife, dad, and kids took a trip to Wichita and came home with four stadium seats. 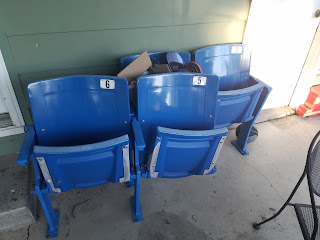 Lawrence Dumont is going to be missed, but she had to go. The park was so out of date, fans couldn't even bring sunflower seeds in because they would clog up the drainage. While not having any minor league baseball nearby next summer is going to make for a long summer for me, it will be made up for when the Pacific Coast League comes to town the following year.
at 9:14 AM