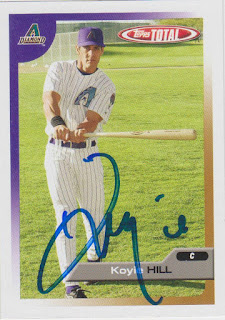 Here is the first of three cards that I got signed by Koyie Hill at the Kansas Stars game last summer. Koyie was on both editions of the Stars squad, but I struck out with him in 2016. It seems like I did better with the pitchers in 2016 and then did better with the hitters in 2017. I could be completely off base on that assessment, but that is the way it seems.

Koyie played in the big leagues for parts of eleven seasons with the Dodgers, Diamondbacks, Cubs, Marlins, and Phillies. The fourth round draft pick out of Wichita State made his Major League debut with the Dodgers in 2003. He played in just three games for them before being dealt to the D-Backs for Steve Finley.

That home run was pretty clutch at the time. The D-Backs were trailing the Pirates 7-3 in the bottom of the ninth. Koyie came up with two on and one out. He hit the first pitch he saw off of Jose Mesa for a three-run homer that brought the score to 7-6. The D-Backs got one more run off of Mesa to tie it before losing in the tenth inning. Mesa was able to pick up the win despite blowing the save and surrendering four runs in one inning of work.