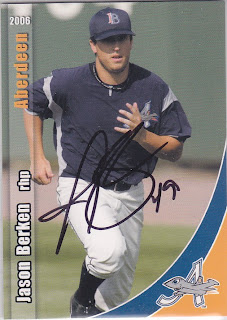 Here is a card that was sent to me last year by Ryan of the Great Orioles Autograph Project. Prior to going to Orioles Fanfest last year, Ryan did a post offering up some free autographs for a couple of players that he did not need signatures from. All his readers had to do was post a comment on who they wanted and then send him a card of that player.

There were a couple of people that I wanted autographs from, but unfortunately, I did not have any cards of them. So, I ended up working out a trade with Ryan where I would get a Jamie Quirk Orioles Crown card signed at Royals Fanfest in exchange for an autograph from one of the players on his list.

But Ryan, being the class act that he is, sweetened up the deal and I ended up getting two autographed cards for the Quirk Crown card. And as if that was not enough, Ryan emailed me which cards he had and he let me pick out which two I wanted. How cool is that?

So in the end, I ended up with this card and a Dick Hall Crown card. Thanks again, Ryan!
at 11:16 AM

Always happy to help you out, glad you enjoyed the cards.