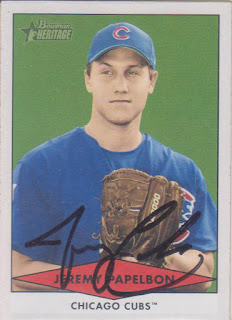 Here is the second of three cards that Jeremy Papelbon signed for me at the 2010 Rickwood Classic. If you are unfamiliar with the Rickwood Classic, it is a lone minor league game played once a year at the oldest ballpark in the United States, Rickwood Field in Birmingham, Alabama. Even though the Birmingham Barons are in their second ballpark since moving out of Rickwood in 1988, they still play one game a year there and it is a great time.

At the game I went to, they celebrated Rickwood's 100th anniversary and the teams wore uniforms from minor league teams from 1910. The Barons wore some plain looking Barons uniforms and the Tennessee Smokies wore uniforms from the Appalachians. Harmon Killebrew was there to throw out the first pitch and sign autographs during the game. I ended up spending more time going through the autograph line than watching the game.

For some reason, I never did a write-up from the game. But, I did post a few pictures from the game when I got around to posting the Harmon Killebrew card.

Jeremy Papelbon had the sense to get Harmon's autograph before the game, as well.
at 10:13 PM