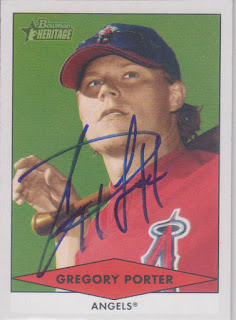 This is a card that I got signed signed by Greg Porter at a Wingnuts spring training game in 2009. Every year, the Nuts open their spring schedule with a game against one of the local colleges in Wichita. In 2009, they played Kansas Newman, an NAIA school. My best friend's brother-in-law was playing for Newman at the time, so we went down to the game to see him play. I took a few cards with me and this is one of the ones I got signed that day.

This is the second card of Greg Porter that I have posted. The first one was posted just a couple of months ago and that card can be seen here. I have one more Greg Porter card to post after this one and it should be up in a few days.

Greg was drafted by the Reds in the third round of the 1998 draft out of high school. He did not sign, however, and instead went to Texas A&M. He played there for three seasons before being drafted by the Angels in the 45th round of the 2001 draft. I am not sure what happened while he was in college, but his draft stock sure plummeted while at College Station.