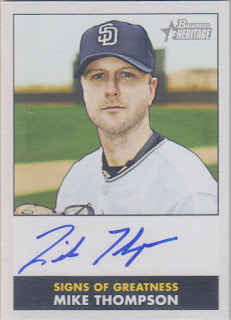 This is the second Mike Thompson autograph that I have posted on here and both of them were given to me. I posted the first card of him back 2011. That card was given to me by Rod, of Padrographs. This one was given to me by Matt, from Heartbreaking Cards of Staggering Genius. I sent him some random cards way back when and he repaid me by sending me a couple of random autographs.

I have mixed feelings about this Signs of Greatness insert set. The design isn't bad for a signature set with the obvious white signing area. But, this Bowman Heritage set looks great signed, so the white signing area may be a little overdone. It probably comes in handy for a card of a player in a darker jersey. But, it is unnecessary on a card with a white or grey. Still, I like the look of this card better than the first Mike Thompson card I posted.

Mike last pitched professionally in 2010. After being out of baseball for a year, he joined the Atlantic League's Somerset Patriots for one season. He started 11 games for them and went 4-3 with a 4.29 ERA.

If I did not know any better, I would think that the first letter in Mike's name started with a "Z".
at 11:52 PM