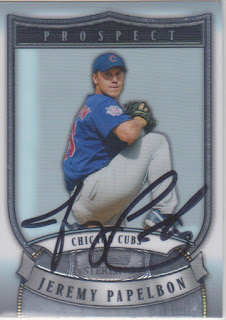 Here is the third and final Jeremy Papelbon card that I got signed at the 2010 Rickwood Classic. You can see the first card here and the second card here.

Jeremy was drafted by the Cubs in the nineteenth round of the 2006 draft out of North Florida. He signed with the Cubs shortly after and made his professional debut with the Boise Hawks that year. He had a good first season, going 4-0 with 3 saves and a 1.86 ERA over 18 games. He got bumped up to Midwest League the next season and went 9-6 with 3 saves and a 3.11 ERA.

He continued his progression in 2008 as he played high-A in the Florid State League. He went 2-1 with 2 saves and a 2.57 ERA. In 2009, he was in AA and half of his appearances were as a starter. His numbers slipped a bit and he finished with a 6-5 record with a 3.38 ERA. He pitched in two AAA games that year, as well, and did not fare too well. He pitched 4.2 inning and gave up five runs on ten hits.

He repeated AA in 2010, and his numbers got even worse than the first go-around. That year, he was 1-2 with a save and an ERA of 5.54. Jeremy ended up retiring after the season.

Jeremy is the younger brother of Jonathan Papelbon.

While Jeremy never made it to the Major Leagues, he does have a big league signature. All three sigs on the cards look nearly identical. That does not happen too much any more.