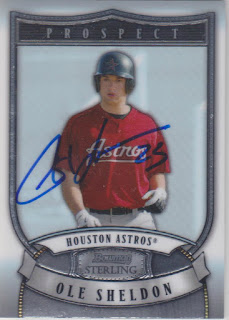 Ole's playing career came to an end after the 2013 season, but he still gets to suit up with the Saints players all summer as he is currently their hitting coach. He must be doing a good job, too, as the top two hitters in the league both play for St. Paul.

I am going to try to see the Saints play the Wingnuts next week if there are any '07 Bowman set builders out there that need a card signed by him.
at 11:26 AM