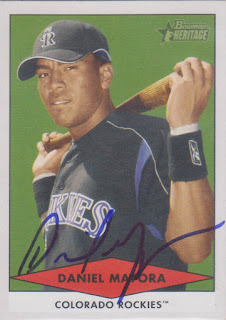 Here is a card that I got signed at Spring Training last year. Daniel was in the Dodgers minor league camp and I was able to get this card signed as he was walking between fields.

Daniel was originally signed by the Rockies and he began his professional career for them in 2005. Eleven yeas later and, while he may not be with the Rockies organization any more, Daniel is still toiling around in the minor leagues. And, while he is at least playing affiliated baseball, he is not even playing AAA. He is in AA. In fact, Daniel has only played in 51 AAA games and they all came in 2011 while he was in the Rays organization. He hit .262 in AAA and got released by the Rays afterwards. He was then picked up by the Giants and then demoted back to AA. They released him after the season, and he spent 2013 in the Atlantic League before being picked up by the Dodgers last year. His two seasons in the Dodger organization were both spent in AA so far.