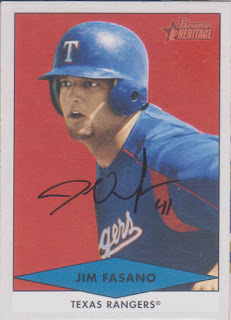 Here is a card that I got signed at an independent league game in 2009. While I do most of my minor league graphing at the American Association's club in Wichita, I got this one signed at a different spot. This card was signed at a Kansas City T-Bones game back when they were still in the Northern League. Jim was playing for the Bones at the time and he signed the card for me before hitting the field for warm-ups.

Jim was drafted by the Rangers in the ninth round of the 2004 draft out of Richmond. He made his professional debut that season and hit .266 in the Northwest League. He was bumped up to the Midwest League the following season and he hit .302 there. He spent most of 2006 in AA where he would hit just .244. He repeated AA in 2007 and his average rose to .284. But, it was not enough, and the Rangers released him after the season.

After that, he caught on with the T-Bones and he would play for them for the next four seasons before being traded to Fargo-Moorehead during the 2011 season. He did really well with the Bones and had two 20 home run seasons during his tenure there. Unfortunately, it was not enough to get him back to affiliated ball.