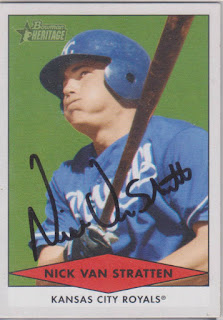 Here is the second card that Nick Van Stratten signed for me at a Burlington Bees game in 2009. Back then, the Bees were the Midwest League affiliate for the Royals. They are currently an Angels farm team, though they had a brief affiliation with Oakland in between the two. The Royals switched their Midwest League affiliation to the Kan County Cougars in 2011 before switching over to the South Atlantic League and the Lexington Legends in 2013. Nevertheless, I still occasionally wear my Bees t-shirt that I bought at the game in 2009.

Speaking of my Bees shirt, I wore it to a Wilmington Blue Rocks playoff game later that season. Nick had been promoted to Wilmington at that point and, when he saw me in that shirt, he shouted out to me "Nice shirt!" and gave me a thumbs up.

Nick is still playing in Mexico right now for the Broncos de Tamaulipas. He is doing real well with a .378 average over 188 at-bats. A couple of his Laredo Lemurs teammates from last year are on the team with him- Travis Denker and Cesar Carrillo. Apparently playing on the Mexican border wasn't good enough for them, so they had to venture down for the real deal.
at 11:56 AM