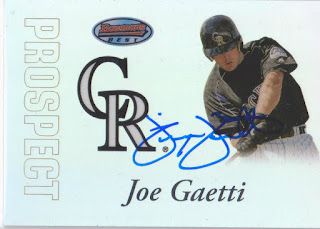 Here is a card of Gary Gaetti's son, Joe, that I got signed at a Kansas City T-Bones game in 2009. Joe was playing for the Northern League's Joliet JackHammers.

Joe was drafted by the Rockies in the twelfth round of the 2003 draft out of North Carolina State. He rose steadily up the Rockies minor league ladder and reached AAA in 2007. At that level, he hit .270 with 11 home runs and 32 RBI in 74 games. But, it was not enough as the Rockies let him go after the season.

Joe then began a whirlwind minor league journey where he played for five different organizations over the next two seasons. He saw time in the Texas League with the A's and Rangers. He played in the Eastern League with the Red Sox and Twins. Just to not leave out the Southern League, he played there too with the Rays. And for good measure, he saw some time in the Pacific Coast League and the Northen League. Joe spent 2010 in the Atlantic League before calling it a career.

Since I have posted every single card that I got signed at T-Bones games, I guess it is time to check out some picture of the T-Bones field, Community America Ballpark. The place was built in 2003 for the Bones and is in the Legends district that features shopping, dining, the Kansas Speedway, and Sporting KC's soccer stadium. The park is dug into the earth and doesn't have much view from the outside. 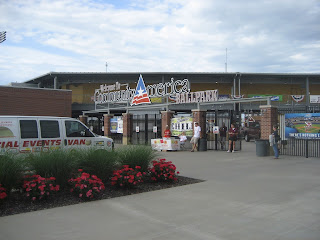 In 2009, Sporting KC (then the Kansas City Wizards) played at Community America Ballpark while Arrowhead Stadium was being renovated. Some changes were made to the ballpark to accommodate soccer. Bleachers were added in left field and most of the dirt was removed from the field. The diamond then resembled an astroturf field with its dirt sliding pits. 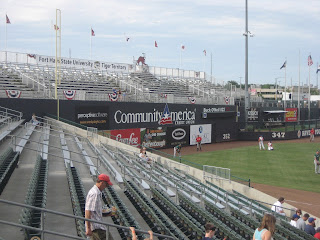 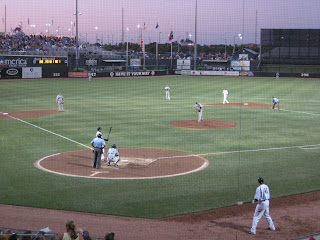 The bleachers have since been removed and the infield has returned to normal. 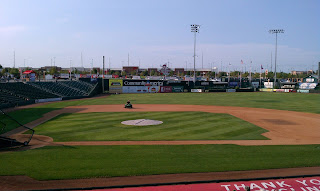 The clubhouses are behind the berm seating in right field which makes it easy to get autographs at the games. 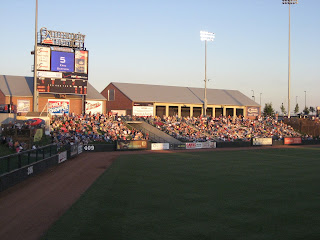 I had the privilege of seeing a few Major Leaguers play at the park. In 2008, the ballpark hosted the Willie Wilson Classic old-timers game. Fergie Jenkins started the game for the green team. 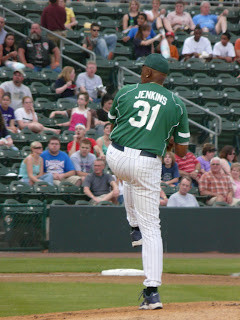 In 2009, Willie Wilson played one game for the T-Bones and started in center. He went 0-1 with a strikeout. 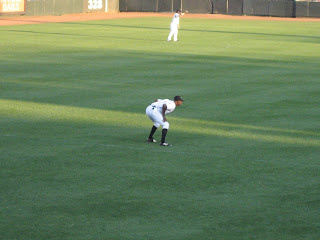 Community American Ballpark is a great place to see a game. With so much to do in the area, it is easy to see why the T-Bones are consistently in the top third of the American Association's attendance.
at 7:21 PM