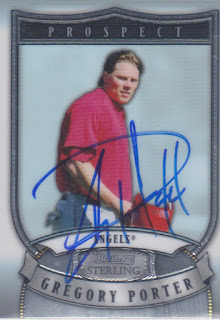 Here is the third and final Greg Porter card that I have to show. This one was signed at at the same Wingnuts exhibition game as the last card of him I posted.

Greg was a little wearing of signing this card because of all the gloss. He actually rubbed it down a little bit before he signed it and then told me that using an eraser on it before signing works really well. Even though I use baby powder for prep now, I really had no clue about prepping cards back in 2009. I had just heard of the eraser method around that time and had actually prepped this card with one. Still, it is always cool to get some 'graphing tips from the guys doing the 'graphing.

He spent the next season playing AAA for the Nationals and Yankees before winding up in Wichita in 2009. He played four seasons of independent ball before retiring after the 2012 season.

I was at a Wingnuts game last week and I noticed that the club added some banners around the concourse honoring their division and league championships and some of their best players. Greg has a banner up for his stellar 2009 season when he hit .372 with 21 home runs and 86 RBI. I wish I would have taken a picture of it so show on here.

You can see the first Greg Porter card I posted here and the second one here.
at 10:40 AM