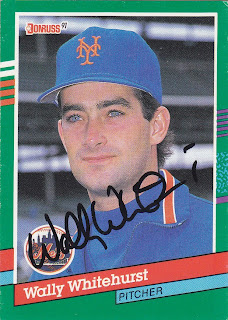 I got this autograph just a few weeks ago while I was on my Maryland trip. I headed north to Wilmington, Delaware to see a Carolina League playoff game between the Lynchburg Hillcats and the Wilmington Blue Rocks. Wally was the pitching coach for for the Hillcats.

I flew in to Baltimore on a Friday and had planned on going to the Rocks game that night. But it rained a ton and I decided against going that night since I wanted to get autographs and rain and autographs do not mix. I ended up going the next night and it was pretty dry most of the day despite the overcast sky.

When I got to the ballpark, the Hillcat pitchers were out on the field getting all of their workouts in. When they were done, Wally came by and I asked him to sign. He signed all three of my cards. While he was doing that, the grounds crew was on the field covering it up. I asked him if they were expecting any more rain and Wally said "not that I know of". About five minutes later, it started to rain and it put a damper on the autograph hunt. But, it was short lived and they got the game in without any problems at all. The Hillcats won the game. Luckily, Wally seems like a better pitching coach than a meteorologist.
at 5:54 PM

I did not know that Wally Whitehurst was still working in baseball.

I remember thinking he was a good pitcher when I was younger, but looking at his career record now I can't imagine where I got that idea.

I do seem to recall that he was always pretty good about signing autographs, though.