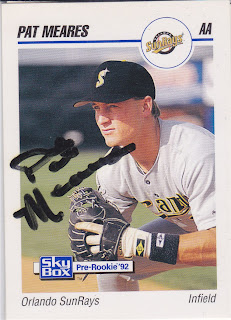 Here is another card that makes the list as one of my favorites. Pat is one of four Major League ballplayers that's from my hometown, Salina, Kansas. He was the first one to make it to the show during my lifetime (the other one that made it didn't play here in high school). Pat went on to play at Wichita State before being drafted by the Twins.

I'm not sure what Pat is up to these days. I think that he lives in Wichita. I faced his brother a few times in alumni games when I was playing American Legion. Last summer, I ran into his dad at Target (I didn't know who he was until I got to the car; my buddy was talking to him).

Oh yeah, I got this card signed through the mail after he got called up by the Twins. Also, I like the SunRays jerseys. It's hard to see in this picture, but they were much better than the ones they wore the previous year (don't worry, you'll get to see that one tomorrow).
at 11:45 AM