The Rest of 2008 Upper Deck Timelines 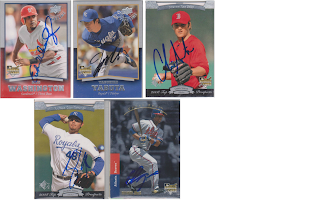 This set was basically an Upper Deck version of Topps Archives. While some of the cards had their own borders made just for the set (see Washington and Yabuta), most of the cards were inspired by some Upper Deck cards that came out in the '90s.

Rico Washington- Rico signed this card for me at a Winguts game in 2010 while he was with the Kansas City T-Bones.

Yaz Yabuta- Yaz signed this card for me after a Royals game in 2009. He was in the parking lot and about to hop in his card before coming over and signing two cards for me.

Chris Smith- Chris spent a season playing for the Wingnuts in 2013, which is when he signed this card for me. When I last posted a card of Chris in 2015, he was pitching in the Padres system. The following year, he made it back to the Majors with the A's and pitched in 27 games with them between 2016 and 2017. He finished his career with a 1-4 record with a 5.41 ERA.

Joakim Soria- Joakim signed this card for me from the Royals parking lot in 2010. That was probably the last year that you could get a decent amount of autographs from the Royals lot.

Brandon Jones- I got this card signed by Brandon in 2014 at a Wingnuts game. He was playing for the Sioux Falls Canaries at the time.
at 10:02 PM