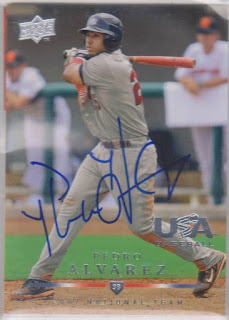 Here is a card that I got signed at the 2009 Future's Game in St. Louis. Pedro was on Team USA that day and I was lucky enough to get him to sign two cards prior to the game starting.

It looks like Pedro's career might be over as he did not play in a game in the Majors or minors this past season.

Speaking of minors, Wichita finally named their new AAA team yesterday and it is probably the worst name in Minor League Baseball- the Wichita Wind Surge. How dumb is that? Anyways, I am still anxiously waiting to go to games at the new park and seeing some AAA ball on a regular basis. I doubt, however, that I will be wasting my money on any Wind Surge gear. Maybe I will just buy a Marlins hat or shirt. Or maybe I will just rock my Royals gear there all season long.

As for Pedro, he has a unique looking signature. It looks more like graffiti than a signed name to me.
at 10:44 PM