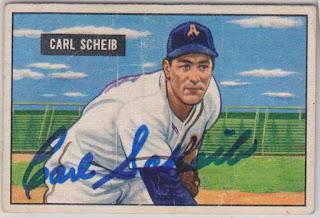 Two years ago, I was looking through my signed cards and I realized that I did not have a signed 1951 Bowman. So, I purchased this card of Carl, mailed it to him the next day, and had it back signed the next week. Three months later, at the ripe ol' age of 91, Carl passed away.

One thing that strikes me when I look at Carl's stats is his strikeouts and walks. Carl was not a strikeout pitcher by any means. In '51 when he struck out 49, it took him 143 innings to reach that number. In fact, Carl was more likely to walk the batter than strike him out. He finished his career with 493 walks to only 290 strikeouts. That has got to be one of the worse K:BB ratios in the history of the game. In 1949, he walked 118 batters. Add in his 191 hits allowed in his 182.2 innings of work and you have a WHIP of 1.692, which was barely above his career average. It was a different game back then and probably better, too.