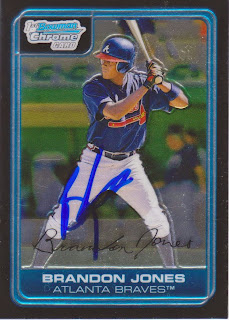 Here is the first of what should amount to six posts about Brandon Jones. Brandon played in the American Association for a couple of years with the Kansas City T-Bones and I was able to get this card signed before a game against the Wingnuts last season.

I put all of my autographed cards in binders, sorted by year and brand. When I first started this blog in 2008, I started with my oldest cards and worked towards the newer ones. If I got any older cards signed, I would wait until I finished posting all of the cards from the year I was working on and then go back and show the older ones before I moved on to the next year. I still post in that order. In the seven plus years of doing this, I have got up to 2006. Yikes. I finished up my 2006 cards two and a half years ago and I have just now almost caught back up to move onto the next year.

At one point, I was a diligent poster and I honestly thought that I was going to run out of autographs at some point. That was probably back in 2010 when I was posting my 2003 cards. That was only a seven year gap between the actual year and the year of the cards I was posting. Considering I started this blog in 2008 with cards from 1960 (48 year gap), it is easy to see why I thought I would run out of cards to post. But then life caught up with me with a better job, a wife, and a kid, and I am unable to post like I used to. Now, it is 2015 and I am only inching closer to posting my 2007 cards. The gap has widened and I doubt that it will ever be any closer than it is right now. That is especially true considering I have about 150 signed cards from 2007 and about 225 from 2008. But, I am just too stuck in my ways. Sure it would be nice to post some cards of current, relevant players. But this blog was never about that and I guess it never will be.

To kind of make up for that, I finally broke down and started a Twitter account. I have been showing my TTMs on there and will be showing any 'graphs I get at games during the season. I am too lazy to make two separate accounts, so you might see some personal stuff on there, like the chicken tacos I made for dinner. But, it is all in good fun. So check me out @zmills40
at 9:50 PM