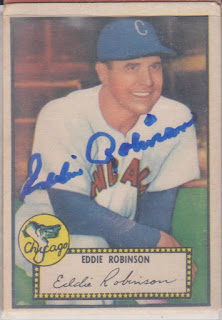 A few months ago, I decided to start a new project. My leads on 1981 Donruss were drying up and I needed a new excuse to send out some TTMs. So, I came up with my Topps Prime Nine project. The goal of the project is to get nine cards from every Topps base set signed, starting with this one. I picked nine because there are nine slots in a sheet and all of these are going in their own album. It is like the history of Topps, but with autographs added.

With the exception of the early Topps sets, it was going to be an easy task to accomplish. But, I made one stipulation and that has proven to make the task much more difficult than I anticipated- a player can only appear in the album one time. So, while my log says that I have thirteen 1976 Topps cards signed, a few of those guys are Royals alums that I have many autographs from. Then I have to choose if I use that player for that set or if he is needed to fill up a page in another set. Because of that, some Royals greats are in my Prime Nine album in uniforms other than the Royals just so I can fill up a page. John Mayberry is a Blue Jay and Willie Wilson is a Cub. That isn't right, but that is the way it is for now.

Anyways, the Prime Nine album is why I got this card signed. Before I started it, I had just two 1952 Topps cards signed. I figured I had better start sending out some cards for this set because there are not too many guys from it still around. Eddie, for instance, turns ninety-nine in three weeks. I sent this card to him in September, along with ten bucks, and I had it back in eight days.

Eddie played in the Majors for parts of thirteen seasons with the Indians, Senators, White Sox, A's, Yankees, Tigers, and Orioles. He was a big first baseman that could really swing the stick. The .268 lifetime hitter had four straight seasons in the early '50s with 20 or more homers and three straight years of 100+ RBI. He made the All Star team in each of his 100 RBI campaigns as well as the 1949 season. Eddie's best year was with the Sox in 1951 when he hit .282 with 29 homers and 117 RBI. Besides the four All Star games, he also played in the World Series twice.

Follow me on Twitter to see all of the Prime Nine TTMs as they arrive in my mailbox. @zmills40
at 9:31 AM