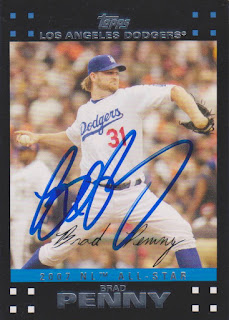 Here is the third card from Brad Penny that I got signed in Wichita in 2016 while Brad was playing for the Kansas Stars. I posted the other two cards in August and they can be seen here and here.

Those first two cards showed Brad with the Marlins, the team he came up with. Less than a year after helping them win the World Series, the Marlins dealt Brad to the Dodgers at the 2004 trade deadline. Unfortunately, the acquisition of Brad did not help the club down the stretch run. He battled injuries and pitched just 11.2 innings over three starts for the Dodgers. The team still won the National League West, but Brad was not available in the playoffs.

After becoming a free agent after the 2008 season, Brad would enter journeyman status by playing with five different clubs over the next six seasons. That whirlwind included two stops in San Francisco and a reunion with the Marlins. He finished his career in 2014 with a 121-101 record with a 4.29 ERA and 1,273 strikeouts.

During Brad's fourteen year career, I only got to see him pitch once. That one time happened to be a rehab start in Oklahoma City in 2008. I didn't even know he was going to be there, so I had nothing to get singed and the man signed for everybody prior to making the start.
at 10:22 AM

Brad Penny's days with the Dodgers were fun. I kinda forgot about him.