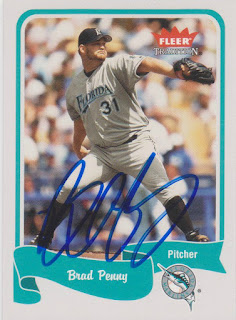 I have gotten Brad penny to sign for me a couple of times during his playing days, so I assumed that this was going to be my third post about him. It turns out it is just the second as I haven't posted the jersey card that he signed for me in 2012. The one card I posted was a minor league signature card that I picked up for cheap. I bought that card to make up for me not having a card of him to sign at a AAA rehab start he made in 2008. Then, of course, I get him to sign at a game a few years later.

I got this card signed at a Kansas Stars game in 2016. Brad was pulled out of the clubhouse to do an interview with a local TV outlet and I got him to sign after the interview. He signed my three cards and the three that my dad gave him. So, I will be having a couple Brad Penny cards coming up on here over the next few months.

Brad was originally drafted by the Diamondbacks in the fifth round of the 1996 draft. But, he would never play for their big league club. They traded him to the Marlins in 1999 for Matt Mantei. Brad would make his Major League debut with the fish the following season. He won his debut, pitching seven innings of one run ball against the Rockies. He struck out three batters and the lone run he gave up was a solo home run to Mike Lansing in the first inning.