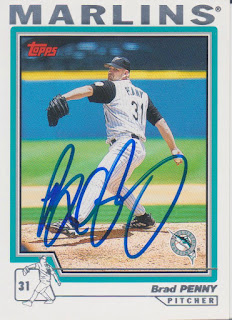 Here is the second card of Brad Penny that I got signed at the NBC World Series in 2016 while Brad was a member of the Kansas Stars. I posted the first card about ten days ago and it can be seen here.

Brad pitched for the Marlins for parts of six seasons. Over that span, he was 50-43 with a 4.12 ERA and 583 strikeouts. He never made an All Star team with the club, but he did help them win their second World Series title in 2003 by going 14-10 during the regular season.

The 2003 postseason was a mixed bag for Brad. He made two appearances in the Division Series and pitched 5.2 innings while giving up 4 runs in a start and a relief appearance. Despite his bad start and blown save, the Marlins won both games he pitched in. In the NLCS, Brad did a little worse. Pitching in three games, with only one being a start, he was 1-1 with a 15.75 ERA in four innings of work. In his start in Game 2, Brad lasted just 2 innings while giving up 7 runs. He got moved to the bullpen after that and threw two scoreless innings in his two outings and picked up the win in Game 7.

Then, in the World Series, he got moved back to the starting rotation and got the ball in Game 1. He stepped it up for that series and picked up W's in the two games he pitched. He threw 12.1 innings in the Fall Classic and gave up just 3 earned runs for a 2.19 ERA. Though Brad would see the postseason two more times in his career, that was his only trip to the World Series.

At the trade deadline the following year, Brad is dealt to Los Angeles in a six-player deal.
at 9:35 AM