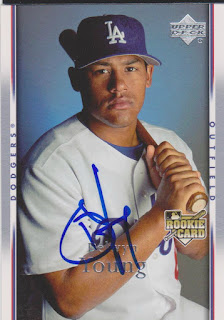 Here is the first of three cards that I got Delwyn young to sign for me at the Kansas Stars game I attended in 2017. Unlike most of the cards I got signed that day, I had to wait around until after the game to get him to sign.

Delwyn would spend most of 2010 in Pittsburgh before spending all of 2011 in AAA. The following year, he would end up in the Atlantic League and spend the next four seasons there before retiring.
at 1:35 AM