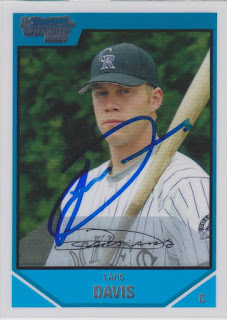 Here is a card that I got signed at the College World Series in 2015. Lars is a coach for the University of Florida Gators and I was able to get him before one of the games I attended. I could not got this card signed without the help of Peter Alonso. I had to ask him where Lars was and Peter sent him over to me. The way it is looking, I should have been asking Peter for his autograph.

Lars played minor league ball for eight seasons without getting a crack at the Majors. Over that time, he was a .250 hitter that had 30 home runs and 197 RBI. He reached AAA and played 92 games at that level and hit .253.

It seems odd that Lars ended up at Florida. For starters, Lars is Canadian and Florida is about as far away from Canada as one can get. On top of that, he played college ball at Illinois. I am not sure how he got on at Florida, but they sure have done well since he joined the staff five years ago. Since that time, they have won the College World Series and have made four consecutive trips to Omaha.

While t doesn't happen every year, it is fun to find a guy coaching in Omaha that I have a card of.
at 6:36 PM