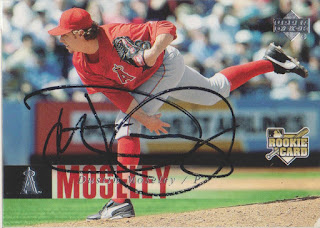 Here is a card that was given to me by Rod, from Padrographs, when we met at a Hillsboro Hops game in 2015. I was always curious why he had this signed Angels card in his collection, but now it makes sense. It looks like Dustin spent parts of two seasons pitching for the Padres.

Dustin spent parts of seven seasons in the Majors, seeing time with the Angels, Yankees, and Padres. Over that time, which was spent starting and relieving, he racked up a 15-21 record with 199 strikeouts and a 4.67 ERA. His best season was probably with the Padres in 2011. Even though he had a poor record (3-10), he threw a career-high 120 innings and responded with 64 strikeouts and a 3.30 ERA, both career bests. Despite his somewhat solid season, he would only pitch in one Major League game after that.

Despite his relatively short Major League career, Dustin had the pleasure of pitching in two playoff games. He threw a scoreless inning for the Angels in the 2007 Division Series and then threw two scoreless innings for the Yankees in the 2010 ALCS. In those two games, he allowed just one hit and struck out five. Plus, he picked up the win in Game One of the 2010 ALCS.