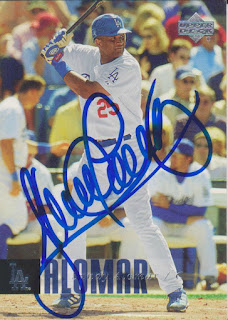 Here is the third card that I have posted of Sandy Alomar, Jr. I posted the first one, one given to me by Rod, ten years ago. The second one, a through the mail success from the late '90s, the next year. This one was obtained in-person in September.

Sandy is the first base coach for the Indians and I saw the Indians play in Kansas City twice this past summer. At the second game, I got to the park super-early to do some 'graphing outside of The K. It paid off when I saw a group of Indians coaches get out of a vehicle to enter the park. Sandy was the only one that I recognized out of the group and I called for him and asked for his autograph. He came over and signed one of the three cards that I had.

I had Sandy one-on-one and was a little disappointed that he didn't sign more than one, especially since his 1989 Topps Futures Stars card was one of the three. But, I could not be more thrilled with the way this one came out looking. There is just something about a clean-looking Dodger or Royals card signed in blue Sharpie.

Sandy's tenure in Los Angeles lasted all of 27 games in 2006. During that time, he managed to hit .323 in 62 at-bats with 5 doubles and 9 RBI. He was traded to the White Sox in July for a minor league player. This is the only card of Sandy as a Dodger.